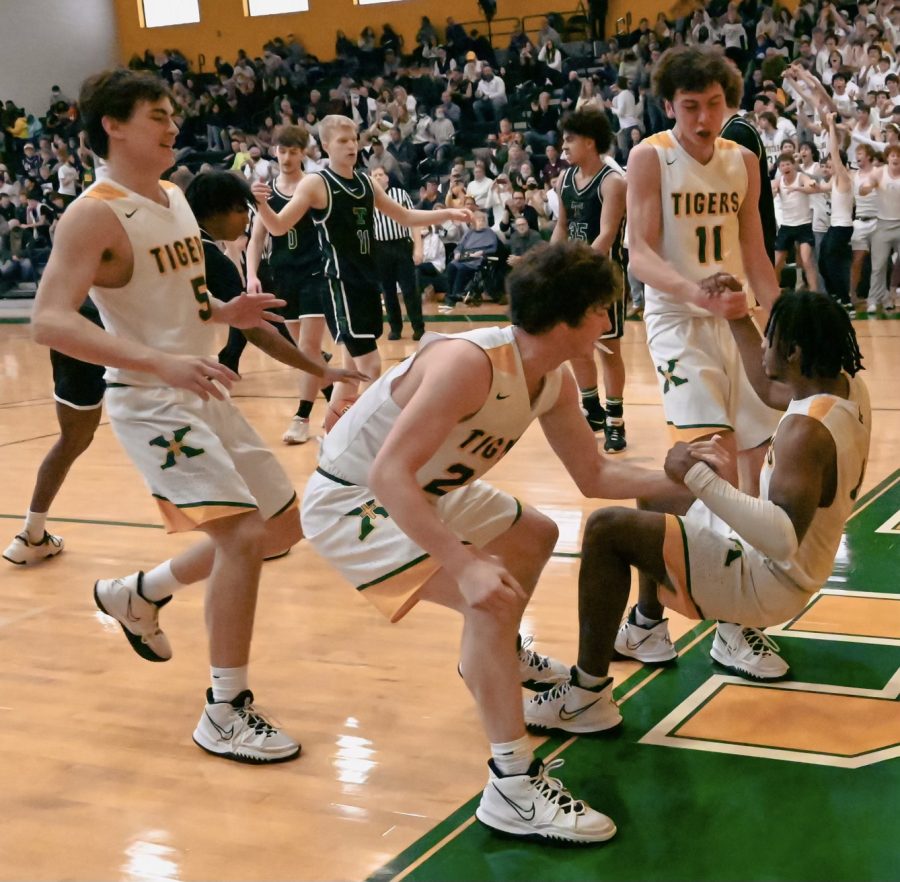 Tigers Down Trinity in a Home Thriller

Saturday, Jan. 15 — St. X hosted arch rival Trinity this past weekend. The Tigers jumped to an early lead, and never trailed the rest of the game — eventually winning the game 67-61.

St. X came into Saturday’s matchup with a bad taste in their mouth. They were looking to avenge their recent loss at Trinity’s Steinheuser Gym on Tuesday (1/11). The first matchup fared extremely well for the Shamrocks — they shot a season high 50.0% from three-point line, along with Cameron McClain’s 23-point outing. The Tigers, however, failed to shoot the ball as well as they did all season (39.4% — top 30 in the state of Kentucky), and with all those things accounted for, the Tigers lost 84-70.

Saturday, however, was a new day. The Tigers opened the game with a Cole Sherman three-pointer, which would be one of many for the Tigers. The Tigers totaled ten three-pointers in the afternoon (all coming from Mekhi Smith, Cole Sherman, and Nelson Williams), and shot an astounding 43.5% from downtown.

Although the three-point shooting was electric for the Tigers, that was not the headline for the game. Senior guard Mekhi Smith was simply unstoppable all game. The dual-sport athlete had 19 points at the half and ended the game with 39. With an addition to the almost 40-point outing, he grabbed seven boards — many of which were crucial down the stretch. Smith finished the game shooting 14-22 (63.6%) from the field.

Here is a postgame interview of Mekhi Smith after his monster performance:

Even with this electric performance from the Tigers, Trinity was still in the game until the buzzer sounded. Much of that can be credited to Junior forward CJ Walls terrific performance. Walls nearly had a double-double in the game, putting up 28 points and nine rebounds.

One thing St. X made sure of — partially because of his terrific performance against them the first time — was that junior guard Cameron McClain was not going to be the source of Trinity’s offense. Senior guard Cole Sherman could be credited with a lot of praise. He held the 20 ppg scorer to just eight points and a foul-out exit.

At the end of the day, the Tigers seemed to have a “hungry dog runs faster” mentality. They wanted it more. An example of that was senior center Nathan Barnes. Though his impact does not always end up on the stat sheet, he ended the game with an array of hustle plays and crucial boards that sealed the deal for the Tigers.

Overall, the game was highlighted by many “firsts.” The Tigers hosted Trinity for the first time ever in Brother John Wills Arena on Saturday. Furthermore, a student-run broadcast team live streamed the entertaining matchup for the first time in St. X school history. Seniors DJ Stobbe and Owen O’Neill were on call for the entire matchup.

The Tigers are now sitting at 12-5 on the season. With a little less than half the season ahead of them, their next game is a big one against Male High School at 7:30 on Friday, Jan. 21. The crowd was awesome at the last two games versus Trinity — let’s bring the Rage Cage to Male. Go Tigers!