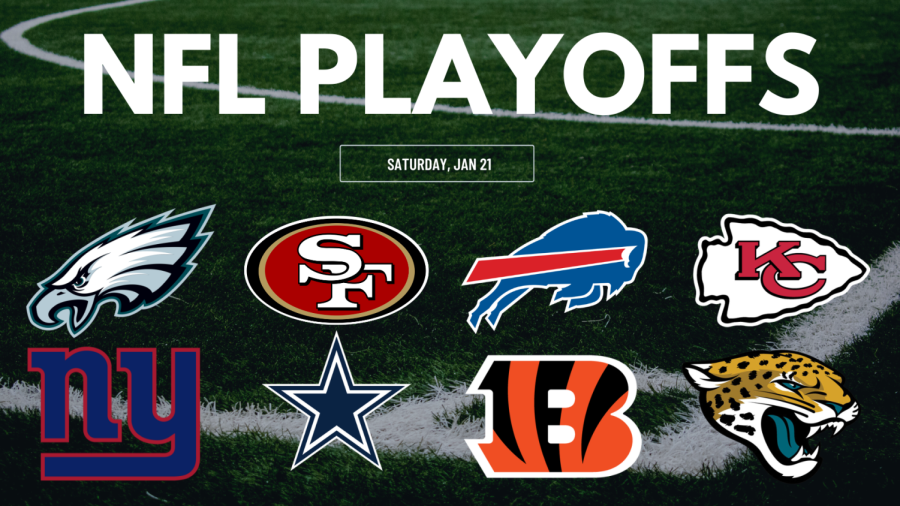 A great NFL Wildcard weekend is in the books, and the NFL Divisional matchups look to be even more entertaining. I think that the final eight teams are all capable of making a run which makes this round even more impactful. It’s going to be another great week of football.

The first matchup of the weekend will feature the mighty Kansas City Chiefs led by Patrick Mahomes. They will open their playoffs against the Jacksonville Jaguars who are coming off one of the biggest comebacks in playoff history. The Jaguars defense will most likely struggle with the high powered offense led by Travis Kelce and Mahomes’ connection. However, after last week’s game, Trevor Lawrence and the Jaguars are definitely eager to play better than they did against the Chargers. I expect the Jaguars to come out firing early on offense using all their weapons: Evan Engram, Travis Etienne, Christian Kirk, etc. This should be a close game especially with two of the brightest coaches in the NFL at the helm.

The second matchup is an interesting one as the lowest seed remaining New York Giants will head to Philadelphia in a rivalry game. As we saw last week in the playoffs in Cincinnati, rivalries in the playoffs are not easy games to win. Jalen Hurts, A.J. Brown, Devonta Smith, and the Eagles running game have been giving defenses issues all year long. The Eagles defense has also been solid all year, forcing many turnovers and getting pressure on the quarterback. However, Daniel Jones and the Giants are coming off a great road win where everything was working for them on offense, and the defense held their own as well. Expect Saquon Barkley and Isaiah Hodgins to make plays, and do not sleep on the Giants in this one.

The first game of the Sunday slate is probably the most anticipated matchup of this weekend as it brings on the massive quarterback battle between Josh Allen and Joe Burrow. Both of these teams have had their star powered offenses carrying the load all year: Jamar Chase, Stefon Diggs, Tee Higgins, Gabriel Davis, Joe Mixon, etc. This should be an absolute shootout. However, the Bills may have the advantage in the trenches as the Bengals offensive line is banged up. I think this game will come down to which defense can force more turnovers or possibly who has the ball last. The winner of this game could go on to win the Super Bowl.

The Sunday evening game will be a rematch of last year’s Wildcard game where the Dallas Cowboys lost a heartbreaker at home. This year’s game should be pretty similar to last year’s matchup heading into it. Both defenses are at the top of the league and have many of the top defensive names in football: Fred Warner, Micah Parsons, Nick Bosa, Trevon Diggs, etc. The Niners offensively have possibly the best playmakers in the NFL: Deebo, Kittle, Aiyuk, McCaffery, etc. The Cowboys do have some firepower to match that with Ceedee, Pollard, Zeke, and Schultz. Dak Prescott just dismantled the Buccaneers on Monday night, and Brock Purdy had a four touchdown game himself against Seattle. Both of these teams resemble each other, and I think the game will be determined by which quarterback can play better against the tough defenses.