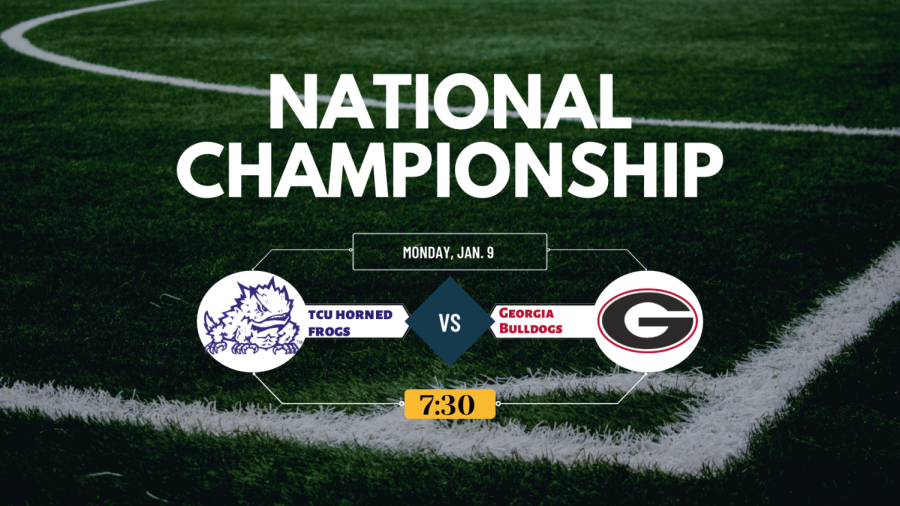 The culmination of the whole college football season is almost upon us. After the two thrilling, competitive semifinal matchups from New Year’s eve, the National Championship matchup is hopefully destined to be just as exciting in a matchup featuring the underdog TCU Horned Frogs and the powerhouse Georgia Bulldogs.

Easily the best story of the college football season, TCU is having an unbelievable season with 13 wins and one overtime loss. This team is led by Heisman finalist Max Duggan, star receiver Quentin Johnston, and a tough, fast defense. The Horned Frogs didn’t play an amazing game against Michigan, but they responded to every one of Michigan’s comeback attempts. This matchup against Georgia will be a whole different ball game than playing against the Big 12.

The Georgia Bulldogs biggest strength is their suffocating defense. They have multiple NFL prospects in the front seven and in the secondary such as Jalen Carter and Kelee Ringo. Georgia should have the advantage in the trenches. Although the defense gets a lot of credit, Stetson Bennett has been outstanding the whole year including last game in the thriller against Ohio State. I think that the winner of this game will come down to the quarterback battle between Bennett and Duggan. The bulldogs may be physically better than TCU, but the Frogs have been playing aggressive and are not going to back down.

Who will have more total yards between Stetson Bennett and Max Duggan?

Which team will have more sacks?

What team scores the first touchdown?