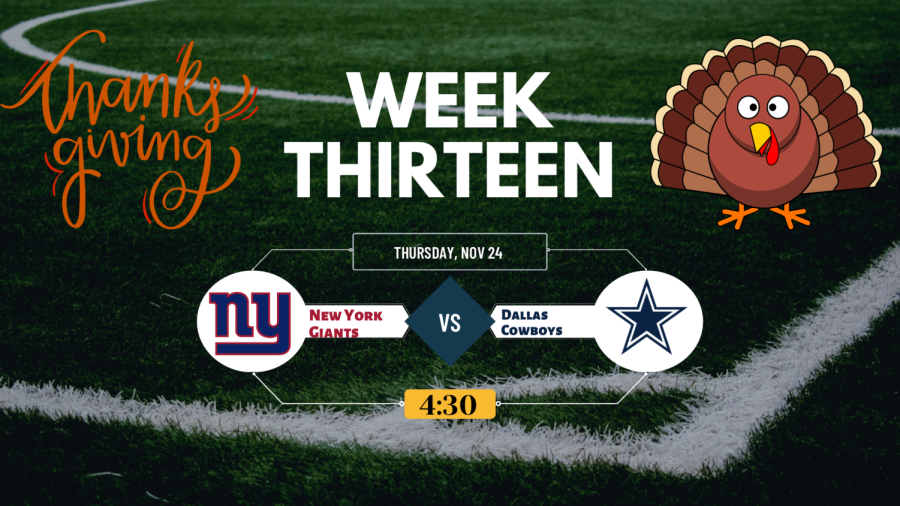 There’s nothing better than football on Thanksgiving: sitting around the TV with your family, having a full plate of food, and watching the Cowboys get a W. This will be the second time this year the Giants and Cowboys meet on prime time. I expect it to be another Thanksgiving classic between these two solid NFC East teams.

The Cowboys absolutely dismantled the Vikings by 37 last week, but I don’t expect this week to be the same. The Giants have found so much success this season purely from their ability to stay into close games. The first meeting between these two was decided by a touchdown, but it easily could have gone either way. The Cowboys pass rush and defense has been incredible; however, Danny Dimes is a very mobile quarterback, so he could cause Micah and the boys some problems. If Saquon gets loose for a couple big plays, this game will be very interesting to watch.

The Cowboys aren’t the only team in this game with a solid defense. Besides last week’s loss to Detroit, the G-Men defense have held their own for the majority of the season, but the Cowboys are starting to click as of late especially with Dak back at the helm. Dallas has averaged over 35 since Dak returned, Tony Pollard and Zeke are punishing defenses with their 1-2 punch, and Ceedee has still been as electric as ever. A win in this game is huge for both team’s playoff chances and momentum for the rest of the season.

Who will be the leading rusher in the game?