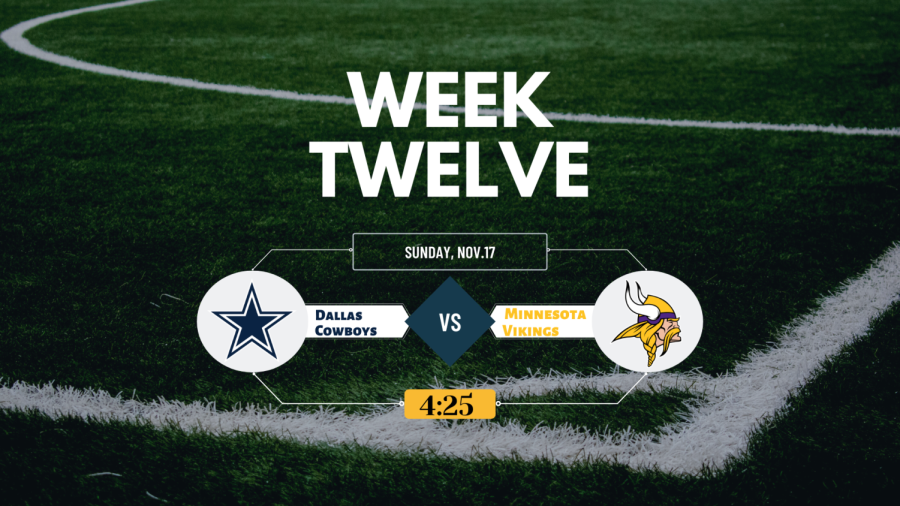 Coming off the potential game of the year, the Minnesota Vikings are arguably the hottest team in the NFL. The griddy king, Justin Jefferson, has been unstoppable, and Kirk Cousins has been playing at a very high level, earning the privilege of wearing his teammates chains on their team flights. On the other hand, my Dallas Cowboys are having a solid season, but they are coming off a tough, overtime loss to the Green Bay Packers. I predict that these two probable playoff teams will play in a close, entertaining matchup in Minnesota.

The key to this game will come down to who wins the battle between the star-studded Viking offense and the consistent Cowboys defense. When Kirk is on his game, Minnesota is a very hard team to beat. The Vikings have more than enough talented weapons including Cook, Thielen, Jefferson, and Hockenson, so the Cowboys will have their hands full. The Cowboys’ strength has been their stellar defensive play this year, allowing only 18.2 points per game this season. With the most sacks on the league, the Cowboys defensive line has been a huge part of their defensive success, along with Micah Parsons and Trevon Diggs who have been exceptional this season. I predict that these two probable playoff teams will play in a close, entertaining matchup in Minnesota.

Which team will have more total yards?

Who will have more total yards between Justin Jefferson and Ceedee Lamb?