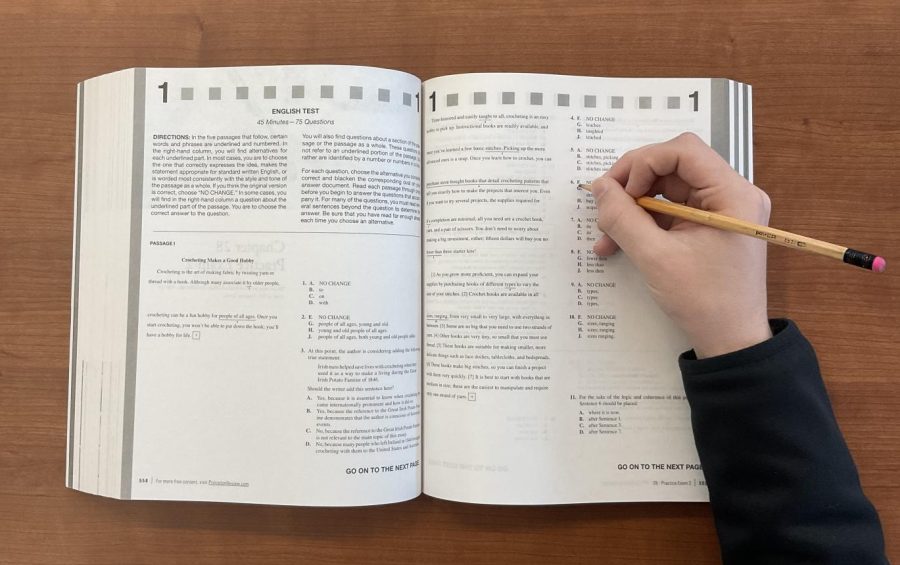 Something that was once a concrete component of the high school experience may now be absolving into irrelevancy.

According to Valerie Strauss at the Washington Post, students take around 112 standardized tests from kindergarten to the twelfth grade. However, the question has arisen, are these standardized tests still necessary in today’s world? Many colleges have begun making standardized tests optional for admission. For example, in 2022, schools such as Harvard University, Clemson, Boston College, Columbia University, Gonzaga, Michigan State, and NYU are all listed as test-optional schools.

Mr. Jed Hilbert is an educator at Saint Xavier High School, a college preparatory school, and he runs an ACT prep program outside of school. He has always been a firm believer in the importance of standardized testing.

“Take it,” Hilbert said. “You have absolutely NOTHING to lose. Heck, take it 3-4 times. Give it your best shot. Prepare for it, because at the end of the day, you are going to feel A LOT better as an applicant if you can put a solid ACT score next to your name, then if you apply without a score.”

Even if you are applying to a test-optional school, taking a test cannot hurt you in any way. Furthermore, a standardized test score may help a college determine what level of classes you should be taking. According to Rachael LaBrasca, a certified Language Arts writing teacher, “Standardized tests are an effective way to measure a student’s mastery of a particular subject or academic achievement.”

One could apply with no test scores and be put in a much higher or much lower class level than they should be. For example, If one is going to college for a science major and has received a very high score in the science portion of one’s standardized test, this could also make the school very interested. It takes around four hours to take a test, not only to show one’s knowledge but also to make an investment in one’s own future.

Testing is not as fair a game as it is presented to be. There are statistical differences between people who come from high-income families and those who come from low-income families. In a 2013 paper, researchers from the University of Pennsylvania and the University of California found that wealthy students routinely have more tremendous advantages throughout their college application process. Families who make more than $200,000 a year average a combined SAT score of 1714. While families that are making under $20,000 score on average at 1326. Wealthier students can also more easily afford tutors, practice exams, and other additional resources.

Recently colleges such as Harvard, Clemson, the University of Kentucky, and Duke, have been accepting test-optional applications for the past couple of years. This is because some universities that standardized test scores do not determine the student’s academic capabilities.

Some students’ abilities are not compatible with what the tests are asking of them. They likely have other talents that a standardized test cannot measure. For example, you could have a fantastic kid with straight A’s and a 4.0 GPA but a terrible test-taker. This person could still attend college and be a tremendous student. In conclusion, a standardized test can not fully measure a student’s academic ability fairly and justly.

“When I was applying to college, I knew I was not going to submit my test scores,” senior Sam Senes said, who is attending Dean College next year in Massachusetts. “Although I had taken and studied for both tests my scores were not worth sending in. With that being said I was still accepted to my school of choice. I had received an athletic offer and a scholarship that pays for more than half the tuition each year.”

Taking and not taking the standardized test both have their benefits. There are boundless positives to taking a standardized test. An outstanding score can help one’s application. It can be beneficial to the school one is applying to determine what level of classes one should take to challenge one’s self adequately. Many people experience advantages when it comes to standardized test preparation. Wealthier students can hire teachers and tutors as well as afford to take the tests multiple times.

While an application could look more pristine with a standardized test score, if it is a low score it could be withheld. While some colleges are test-optional, one would have a greater chance of getting accepted with a good score on the application. In our new age, the standardized test, which was once required, is now perhaps drifting into irrelevancy.