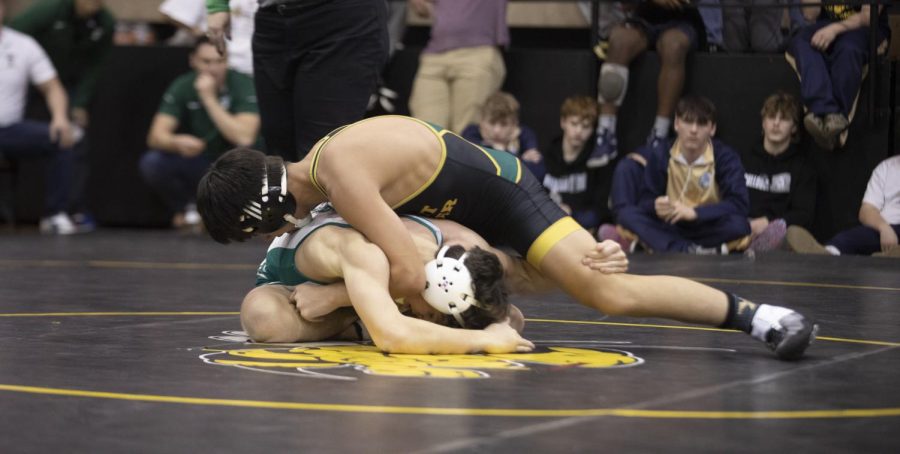 The wrestling team is seeking their 4th state championship and has started this off season with countless hours of hard work. St. X finished 8th place in the 2021- 2022 state tournament under their new head coach, Efren Quirino.

“We have a great core group of wrestlers that are working hard and understand the goals of challenging yourself, supporting your brothers, and building the premier wrestling program in Kentucky,” Coach Quirino said. “Justin Krebs, Grant Spalding, and Max Speaker are some of the guys that are leading our team in the off season.”

The team has engaged in grueling off-season work, especially with their infamous Zoo Run, which has been a staple in the offseason for about a decade.

“We do a lot of cross training to build overall fitness, combat overtraining injuries, and make training fun,” Coach Quirino continued. “We started this [Zoo Run] during the 2012-2013 season… It is a 3.5 mile run that has hills to make it challenging and then we take it to the next level by hand fighting, using wrestling specific skills halfway through the run.”

The wrestling team also does many other off-season exercises other than the recently described trainings. They mainly work to build strength and endurance while also being agile.

“We focus on building strength, overall fitness, and athleticism in the off season,” Coach Quirino said. “We lift weights, use our functional training equipment in the wrestling room, and get outside as much as possible.”

This will be Coach Quirino’s second season as the head coach, so he and the wrestlers are looking to form a strong culture for the upcoming season.

“The schedule is that we have weightlifting and conditioning on Mondays, Wednesdays, and Thursdays,” Max Speaker said. “I think we really need to improve on consistency and staying aggressive even when we are winning.”

In order to get where they ultimately want to go, they will have to be as committed as possible and be willing to sacrifice quite a bit. The players are more understanding of what will be required to reach their heights.

“This season, we are focusing on getting everyone involved and in the room as much as possible,” senior Grant Spalding speculated. “Last year, we frequently had people skipping practice. We’re looking to get wrestlers more involved.”

The wrestling team is made up of a lot of dynamic athletes. The team is filled with many powerlifters and football players.

“We love multi-sport athletes. Last year we had wrestlers on seven other teams during the fall and spring. Wrestling is a great way to build mental and physical toughness and grit and learn how to push yourself,” Quirino said. “Several of our football players will join us once their season is complete, and we also traditionally have wrestlers go on to powerlifting in the spring to compete for state titles.”

In the meantime, if you see a pack of Tigers heading towards the zoo, you’ll know why — they’re on the hunt for that fourth state title.