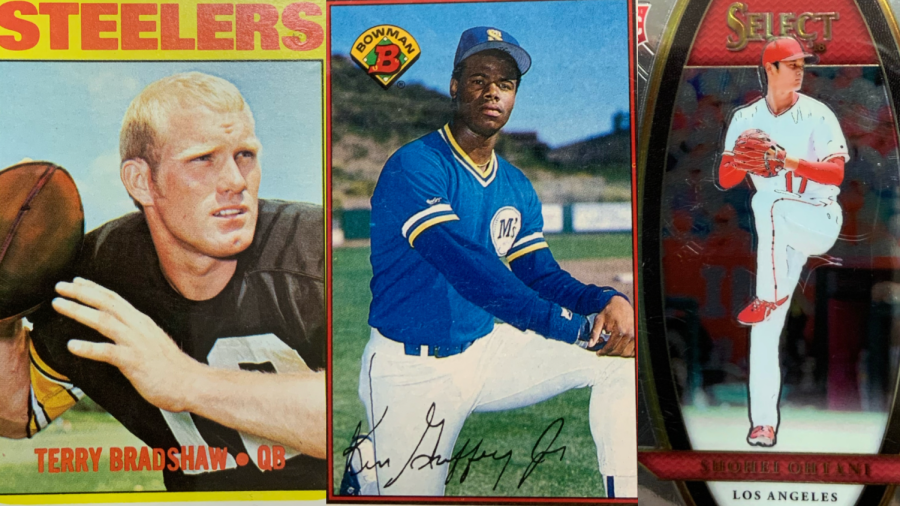 There is money to be made in sports cards. Most people view sports cards as an old piece of cardboard and throw them away as if they are childish hobbies. Little do most know, sports cards could be worth millions of dollars. Sports cards have always held their value, but the recent market explosion will leave you shocked.

Yes, unfortunately not all sports cards are valuable. Certain sports hold a greater value such as NFL and and the NBA in comparison to NASCAR and the MLB as a medium. The market is always changing.  Certain players values rise or drop depending on recent performances or accomplishments during their seasons.

The most money is seen in three main categories: certain player, rarity, and investments. Everyone loves players such as Lebron James, Mike Trout, and Tom Brady. Not only have their past performances increased their market value, but media aspects and staying relevant in daily talks raise their value as well. Collectors want to have top of the line cards to make the most money, as well as add rarity to their collection. With these high market players it has become necessary for any collector to own their cards.

One of the most recent cards that has gotten all collectors attention was the Lebron James triple logo man One of One. This card is serial numbered to one which means it is the only card of its kind. It also has the logo man from Lebron’s jersey on the recent Cavilers, Lakers, and Heat teams which makes it one of a kind. This card could only be found in the 2020-2021 NBA flawless collection trading cards and sold for 2.4 million dollars at Goldin auctions. Yes, a box of Flawless collection will cost you $15,000 for just ten cards but some say the risk was worth it.

A personal experience I have had deals with my Ken Griffey Jr. Flawless collection autograph serial numbered to ten. I did not buy a $15,000 box of MLB flawless, but I had purchased this card at a local card shop during a depreciating market window. This card cost me $290 after negotiation and now with a rising market it is valued at $800 or more.

Now on the rarity side of trading cards it gets complicated. Many aspects of one singular card can change its value greatly. A base card is the least rare. Base cards consist of regular pictures of an existing player and are mainly what you find in a box of trading cards. Base cards of older players such as Babe Ruth or Joe Montana can be worth a significant amount of money, however.

Rookies are next on the rarity list. Obtaining a rookie card of an upcoming player is exciting because future performances and fame increases the cards value. Serial numbered cards are next. These are rare insert cards that are short printed based off of their number.

Jersey and autograph cards are some of the rarest. Not all autographs or jersey card inserts are worth a lot of money. What is worth more is autographs of well known players and or unique pieces of their jersey in the card. If you’re lucky, you can even find “patch autos” that contain the players autograph and jersey in one.

The rarest type of cards however are One of One serial numbered. These specific cards can be Gold vinyl and Black Finite. Not all are these colors because you can still find autographs and jersey patches in a one of one making the value even greater than before.

You may be asking yourself, “is it worth the initial buy in on a box of cards and or single card?” Some may argue it is not, but it has been proven that money can still be made through sports card investments. There are many options for investing. The most popular strategies for card investing would be to buy and hold and never open boxes of cards you buy.

When you buy and hold, waiting for the player on your card’s value to go up is key. After a big game, prices will rise and fame will be high, making it easy for you to sell and profit. Holding boxes revolves around the same idea. When demand of a certain box is low, you should buy as many as you can. This is because when new rookies or short printed one of one cards have not been found people will scramble to buy more. When they scramble you can raise your price and profit.