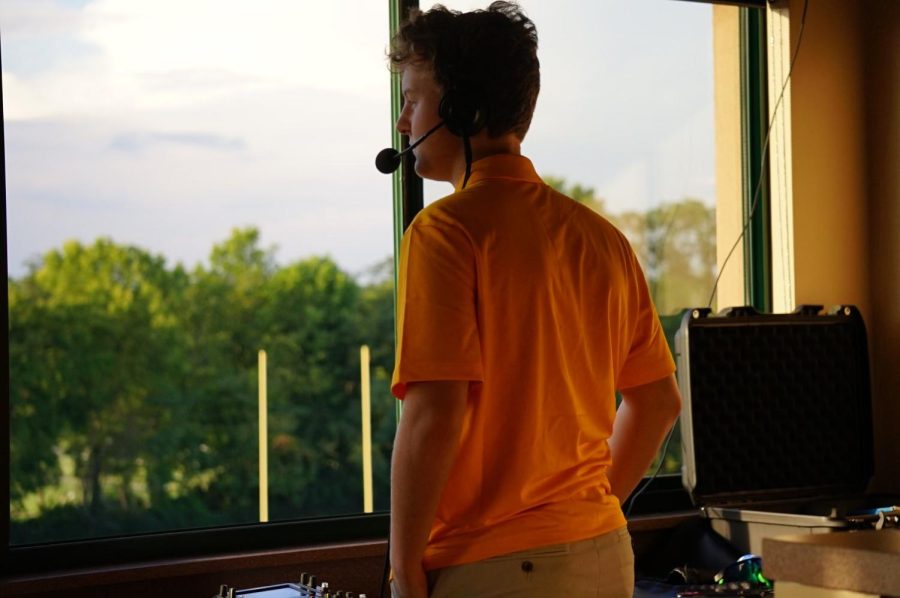 In the Booth With Matthew Lynn

Matthew Lynn is a sophomore who has stepped up to take over the student broadcasting for St. X sporting events. He has already called thirteen games this year. He has called soccer and football, most notably for the varsity St. X vs Trinity soccer game. Lynn’s work can be found on the St. X’s Youtube channel, where the broadcast is live-streamed and saved.

For Lynn, he wasn’t just volunteering to fill the vacant spot — he is very passionate about sports and loves everything about them.

“Ever since I was six or seven years old I have always had a passion for just sports in general. This love for sports grew, and eventually I wondered where I could take it and do it as a job,” Lynn said. “In 7th grade I was looking around on the internet, when I found a camp run by a group called Play By Play Camps. I have been to two different week-long camps where they taught me everything I know.”

Something that a lot of people don’t know about Lynn’s broadcast is how much effort goes into it. He spends a lot of time before a game studying the key players and positions for both teams in whatever sport he is calling from the rosters he has collected. He writes down records, head coaches and managers, and some stats about the team and individual players.

“On game day, I always leave school to get something to eat down the street either Qdoba or Jersey Mike’s. Then I will review my notes that I made the night before” Lynn said. “Around one hour before the game starts I’ll head up to the booth and set up my equipment, turn it on and we are ready to go.”

This year, Lynn likes to use statistics in his broadcasts, and he takes great pride in providing valuable information about players and their past performances. Lynn plans to continue to pursue his passion for broadcasting after his time as a Tiger. He is going to take these next two years at St. X to refine his craft and see how far he can take it.

“I do want to take this to a level after St. X with an internship somewhere or even get a degree in broadcasting,” Lynn noted. “Until then, I’ll keep calling the games here, and maybe start doing road games or do some other games around the city if I get the opportunity.”

Lynn has already proven that he can effectively broadcast Tiger sporting events, and this is due to his passion and preparation. Other students who may share this same passion with Lynn can join him and form a broadcasting crew similar to Stobbe and O’Neill last year. Make sure to tune in to Lynn’s future broadcasts if you can’t make it out to the games!