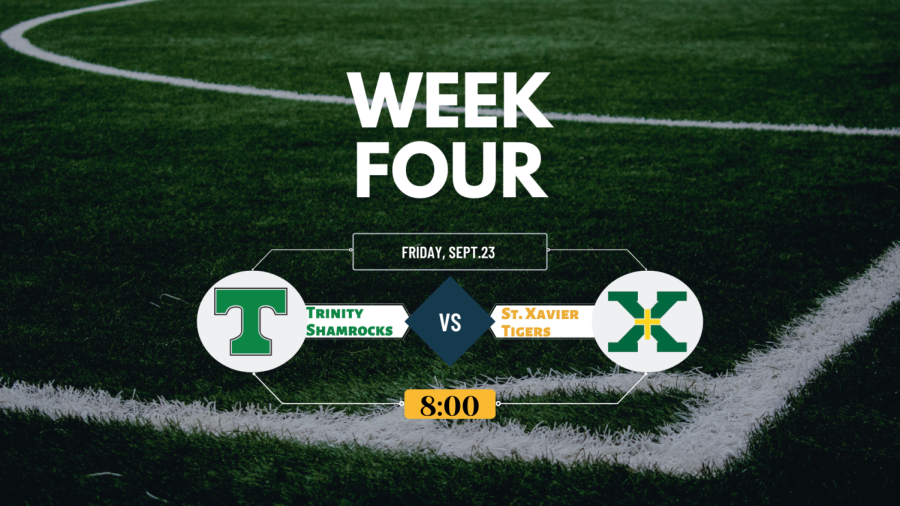 In one of the best high school sports rivalries in the nation, the mighty Tigers of Saint Xavier will face off with the Trinity Shamrocks in a huge football matchup this Friday. Over the past ten years, the Shamrocks have had the Tigers number. However, after a win in the rivalry last year on the way to a state championship run, the Tigers are looking to gain the upper hand. The Tigers main strength is their solid defense, led by Purdue commit, Micah Carter, who has already tallied three sacks on the year. Carter is a huge part of the stellar linebacker core along with Jaxon Panariello, Austin Uhrhan, Holden Siebel, and Henry Murr. The Tiger defensive backs are also a very solid group as well with key players such as Tyler Boggs, Cooper Smith, Kanon Williams, and Jack Fitzgerald.

Although the defense has been outstanding for the Tigers, the offense is not something that should be overlooked. Trevor Havill has gotten better in each game he has played, and this has been made easy by our solid receiver core. The receiving core has a lot of depth and is headed by Adam Boone, Jackson Campisano, Zach Marks, and freshman stud Marlon Harbin. Our two headed snake of running backs, Davis Yates and Dontre Richardson, have continued to play well all year. I expect the Tigers to play their most complete game yet on the biggest stage.

Both teams are coming off a loss. St. X lost to Elder in Cincinnati last Friday, and Trinity lost a tough game to Male last Friday. Trinity’s main strength is their defense, so it’s going to be interesting to see how the first couple drives go for the Tigers. Anything can happen in a rivalry game, and Cardinal Stadium is going to be wild.

What defensive player has the most tackles?

Who has the most receiving yards?