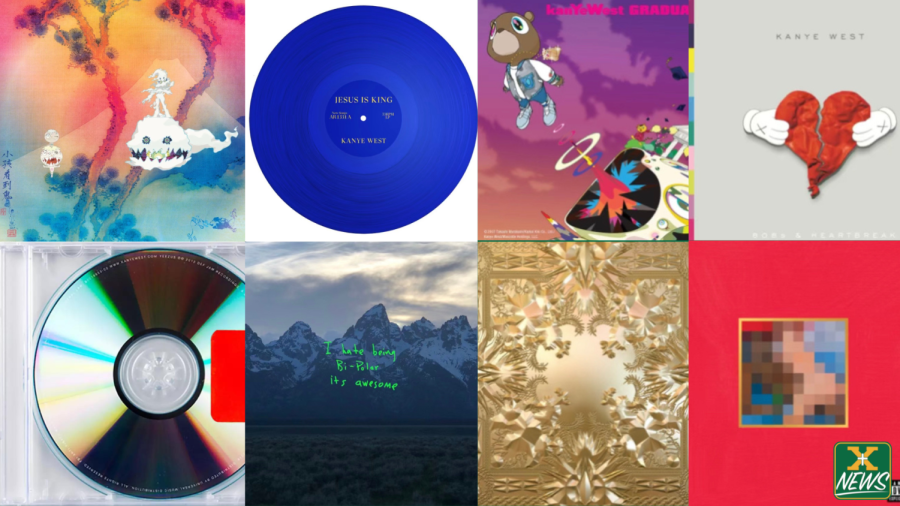 How do I pick the best when there are so many to choose from?

Kanye West is a name that may evoke a wide range of emotions in individuals who hear it. Whatever your feelings are about his mental state, it is evident that he has some pretty legendary tunes. But now, I’m going to address a question that people have been asking for the past 15 years: how do these albums rank? How could one individual be simultaneously branded a genius and an idiot? Let’s get started.

“JESUS IS KING” would be a good album for most people. However, this album falls short for a man with one of the most substantial discographies. Kanye aims for a gospel flavor on this project, and he succeeds. The only issue is that he has previously made fantastic music. While that is a good problem, this album falls short of his previous works. There are several highlights on the album, including “Follow God”, “On God”, “Use This Gospel” and a few more. But with lyrics like “Closed on Sunday, you’re my Chick-Fil-A,” it’s difficult to stand behind it.

There’s no doubting that some of Kanye’s most recent album’s songs smack. When this album was released, I was all over it, but compared to his past ventures, it simply does not compare. This album stands out more than “JESUS IS KING” because of its characteristics. Roddy Rich’s “Pure Souls” and Jay Z’s “Jail” standout performances had me adding these songs to every playlist. Another big issue with this album is several tracks’ length. Many songs appeared to drag on, and I wondered why the music wasn’t made at the conclusion; however, this album would be impressive for anyone who isn’t Kanye West.

I’m aware of how passionately many people feel about this record, so I’m bracing myself for the reaction. This album has an evident impact on subsequent performers. One may argue that Kid Cudi would not be as popular now if not for this album. Without this album, there may still be a significant divide between the two realms of rap, hard rap, and rap, with a lot of auto-tune. These points are valid; however, in my opinion, the music isn’t as fantastic as on some of his previous albums. Sure, there are some excellent tracks, such as “Coldest Winter”, “Welcome to Heartbreak”, and “Heartless”, but the auto-tune is distracting and overbearing to me.

When you hear about a collaboration between two people who have impacted music as a whole, you have high expectations. “Kids See Ghosts” is one of those songs where you see the names Kid Cudi and Kanye and immediately lose your mind. This album could have been better. There isn’t much to say about this album because it has seven tracks that run less than 25 minutes. But, one must stand out with seven pieces created using these symbols. This highlight song is “Reborn.” Despite its simplicity, the song’s message is one we can all use daily.

This is where I’ll mention my favorite song by Kid Cudi and Kanye West. This album has the same number of pieces and is nearly as long as “Kids See Ghosts.” Kanye’s fight with bipolar disease is one of the album’s key themes, apparent even before you listen to a song. The album’s tone is set by the classic cover depicting a gorgeous mountain range with the slogan “I hate being Bi-Polar, it’s fantastic.” It works well with tracks like “Yikes,” “Violent Crimes,” and, notably, “Ghost Town.” “Ghost Town” is unquestionably one of Kanye and Kid Cudi’s most significant collaborations. As the project nears completion, the theme of freedom is strongly underlined.

Following up on “The College Dropout” is a challenging assignment for any album, but this album demonstrated that Kanye was more than a one-album wonder. Kanye created a reputation for himself when he presented his potential in the previous album. Kanye had some competitors coming from Chicago who was also on the rise. There’s not much to say about this album outside mentioning classics like “Hey Mama”, “Diamonds From Sierra Leone”, and, of course, “Gold Digger.” Jay-Z, Jamie Foxx, and Adam Levine all made appearances on this album. This album is excellent, making it ideal for the six spot.

Regarding Kanye albums, one stands out in terms of style. “Yeezus” is the only outlier. This album has a more electronic sound than anything Kanye has ever released. It’s incomprehensible, and you’d have to hear it for yourself to comprehend it truly. Instead of a usual melodic manner, Kanye nicely suits the techno ambiance. This is evident in songs such as “Blood on the Leaves” and, in particular, “Bound 2” — one of my favorite Kanye tunes. This album has aged beautifully, which is unusual for records of this caliber. Kanye exhibits his versatility and shines in this album, as he usually does.

The fact that this record is ranked fourth demonstrates its legendary stature. Kanye West returns to the music world with a bang three years after Yeezus. “Ultralight Beam” and “Father Stretch My Hands Pt. 1” might be one of the finest album openers ever. This album has several immediate hits among Kanye’s most exemplary efforts. “Waves”, “Saint Pablo”, and another immediate classic, “No More Parties in LA” keep the album going strong. Kanye collaborates with Kendrick Lamar, another of the finest and most influential rappers of all time, on “No More Parties In LA.” This album would be number one for many artists, yet it fits well in Kanye’s three positions.

Kanye West’s debut studio album propelled him to one of the hottest starts a rapper can have. It would be understandable for an album released in 2004 to age poorly, yet the reverse is true. Kanye’s career began with this album. Kanye has shown his variety and tenacity in songs like “Jesus Walks”, “Slow Jamz”, and, most notably, “Through The Wire.” There is tremendous respect for “Through The Wire” after hearing the tale behind it. Kanye’s jaw was fractured in a catastrophic vehicle accident, necessitating the placement of wires throughout his mouth. He composed this fantastic song with one of my favorite rhythms while still having wires in his mouth.

I will be honest with myself and everyone else, as much as I want to put this music in one place. This is my favorite Kanye album doesn’t make it the best. But, to be honest, I could go on and on about how great every song on this album is. But if you haven’t heard this album yet, do so because you won’t be disappointed. Here are a few of my favorites, to mention: “I Wonder”, “Can’t Tell Me Nothing” and “Homecoming” are among songs. These songs reveal distinct facets of Kanye, yet they all fit together well. This album continues the string of splendid appearances, particularly from T-Pain and Chris Martin.

There isn’t a term to describe this album. I wanted to be charming and add “Graduation” at the top, but there’s no doubt. When it comes to one of the finest albums, it must be flawless. The album’s diversity and production quality assist in creating a stage for Kanye to showcase some of his greatest rapping we’ve ever seen on tracks like “Dark Fantasy” and “All Of The Lights.” Not to mention how fantastic every beat in this project is. This album also has “Runaway,” my all-time favorite song, which gave me chills the first time I heard it.