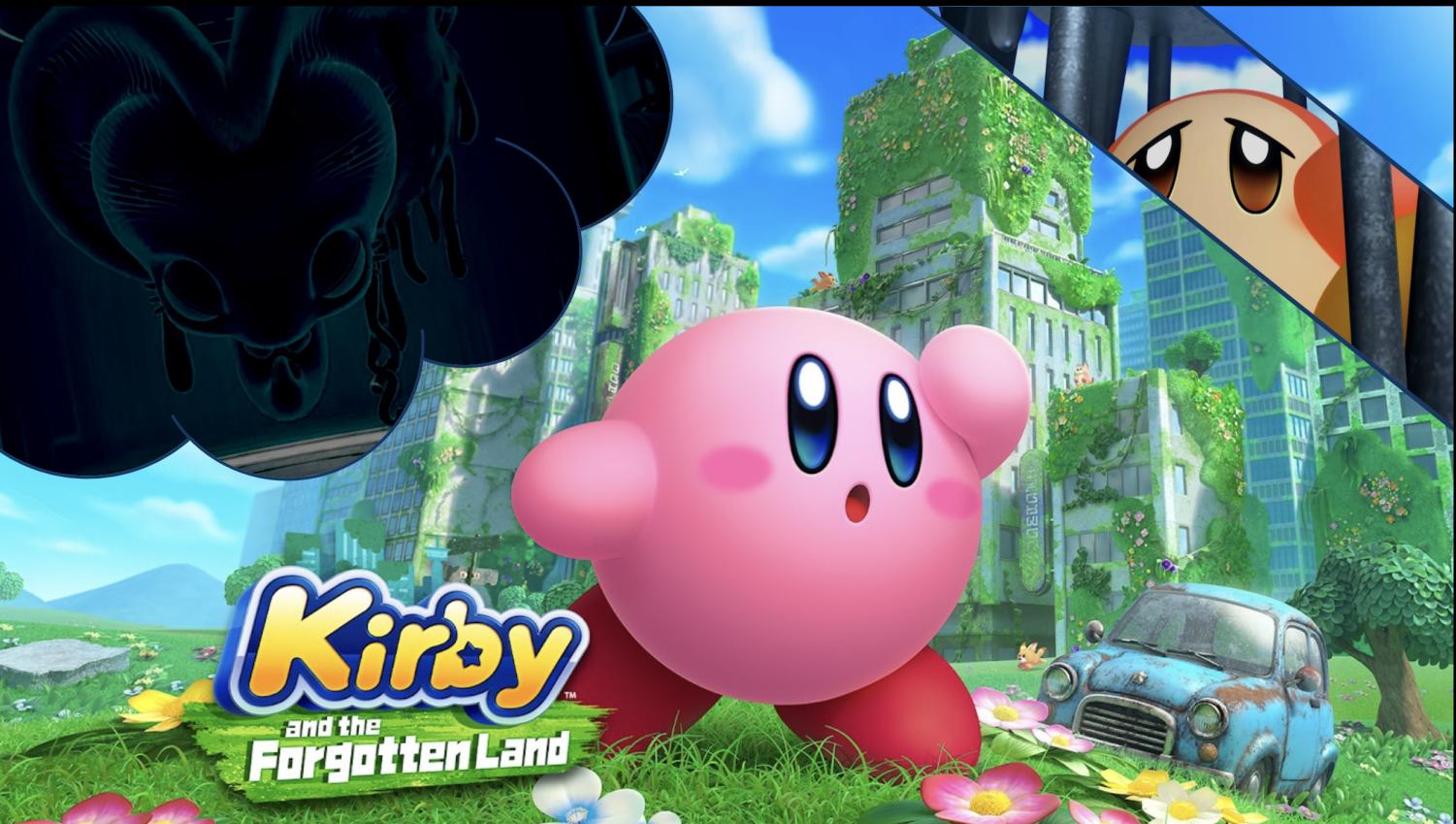 Kirby and the Forgotten Land box art plus in-game Art.

Kirby and the Forgotten Land box art plus in-game Art.

The Puff to 3D

Kirby, Kirby, Kirby… It’s been a long wait for the puffball’s first real attempt at the third dimension, but the wait was well worth it. This franchise has a habit of starting off new eras of its history with a bang, and Kirby and the Forgotten Lands is no different. In fact, this could very well be the zenith of Kirby, not just because of its boisterous sales, but also by its quality.

After Kirby and Co. get warped through a massive space rift, something feels different about Kirby, and it’s not the new dimensional plane. This strange turn of events has left Kirby with a mouthful.

Coming alongside the usual copy abilities, is the brand new mouthful mode. This new gimmick brings a lot of interesting possibilities with it by letting Kirby transform into whatever he sucks up. This idea allows for many ideas that can only occur in this game by allowing Kirby to become things like cars or traffic cones. Nearly every transformation present is a welcome addition. The biggest problem with it, is the lack of some of them, and the over abundance of the traffic cone sections in the game. I feel like, though it did many things right, Mouthful Mode wasn’t shown off to its true potential, but I also doubt we’ll ever see it again considering the constantly rotating Kirby gimmicks.

Aside from his unique ability-centric gameplay, Kirby’s biggest draw is the uncharacteristically great music from every single one of the franchise’s soundtracks. Forgotten Lands has some really good tracks like the Jazz oriented Meta Knight theme, fervent Masked DeDeDe remix, and chill Snow wonderland songs. Most of the OST is just typical Kirby music, however, with most of the great only appearing in the later parts of the game.

Most of your time in this game is spent, actually… you know, beating the stages. The stages in the Forgotten Land are all based around the idea of a ruined city now filled with nature. The stage theming has a smaller scale compared to the other recent games like the mechanical wasteland of Planet Robobot and the cosmic mess from Star Allies, but the more compact theming allows for the city landscapes to be fully realized. My favorite world in the main game is the aforementioned Snow world based on the ruined city of London. The white vista looks glorious on and seeing Big Ben brings along a cool piece of continuity.

There is another world in the game that only shows up in the postgame which is my favorite location in the entire series. Seeing all the worlds and bosses remixed in the purple haze of Forgo’s Lost Isles not only looks gorgeous, but also repairs the disappointment of Star Allies by showing what Star Allies setting could’ve been.

Like most games, there’s a boss at the end of each world for the pink puffball to fight against. Most of these are rather generic though besides a few highlights. The biggest and most unexpected of which for those not familiar with the ins and outs of Kirby is the final boss. Kirby may look like an always jovial franchise, however near the end of every game, Kirby is usually faced with a lovecraftian abomination to fall. Fecto Forgo (labeled ID-F86) is Forgotten Lands’ nightmare fuel, which ends the game at a glorious high note.

Past the final boss, laying at the end of Forgo’s Isles lies a hidden final boss which is easily my favorite fight in the game. Morpho Knight and Meta Knight, who’s accessible much earlier, are both optional bosses, but ones that hold significance because of what they mean to the series. Morpho Knight is a relatively new face, but holds some of Kirby’s biggest challenges.

Kirby and in the Forgotten Land doesn’t quite reach the pinnacle of the series, but I do think it’s up there. Super Star Ultra and Kirby Planet Robobot now have another to stand in the leagues of this franchise’s best. The 3D space lends itself to having grand boss fights and better landscapes. Others are still able to beat Forgotten Lands with things like music and mechanics though. There is still a lot of other goodness sprinkled throughout this polished 3D world like the waddle dee town you help build throughout the game and the couple of mini games the game has. Everything in Kirby in the Forgotten Lands does its best to create a fun and memorable experience. This adorable pink puffball brings experiences made not just for kids, but for truly everyone.