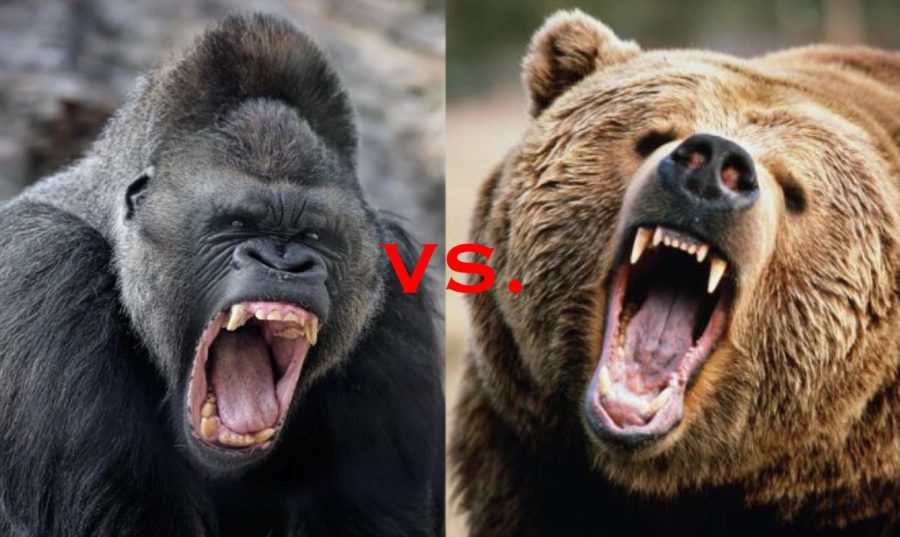 GRIZZLY versus GORILLA: Who Would Win?

I have spoken; the debate is over.

Let’s get one thing straight here: I have had enough of this silly debate. Whenever I engage in this conversation, I am left dumbfounded, saddened, and questioning the educational system of this country. It’s high time that I take it upon myself to put this discussion to bed once and for all, and deliver a well researched, heavily analyzed thesis on who would win: a grizzly bear, or a silverback gorilla. But before we can go any further, let’s lay out the rules, along with some basic numbers.

• The fight will take place in an environment in which aspects of both animals’ natural habitat are present. There are trees, some foliage, a bit of open field area, changes in elevation, a river, and a small, still body of water.

• This is a head to head confrontation, therefore both animals begin within each other’s line of sight.

• Both animals have the intention of fighting, and there is no chance of backing down

• No other animals are present to interfere, and no human technology is obtainable to either participant

• Fight ends when either animal dies or is otherwise incapacitated.

Let’s lay out some numbers for reference:

(Statistics on the participants’ strength as a whole both vary and are somewhat lacking due to difficulty of acquiring such data, but virtually all reliable statistics place gorillas much higher as far as physical strength goes.)

As you can see, most stats lean heavily either way, but there’s really no conclusion to be drawn from these projections without further analysis into the implications of them. To start, the grizzly’s weight advantage packs quite a punch if the bear lands a clean hit with the force of its weight. Furthermore, if the grizzly manages to plant a hard hit on the Gorilla right off of its initial charge (which again, can be at speeds of up to 35 mph), that might prove very detrimental for the gorilla. This is where our primate pal’s maneuverability may come in handy. Gorilla supporters will definitely hope for a well-timed dodge or jump if this scenario takes place. It’s worth noting that despite their large and heavy appearance, bears have no issue with turning while in a charge. But if it’s careful, the gorilla may catch the bear off-guard and get an early attack in.

But let’s assume neither animal lands any decisive blows right off the bat, and that they start posting up for the fight and analyzing the situation. Much like a human fight, there will likely be a lot of attempted attacks and waiting for openings. Both of these animals could do some major damage with a bite, considering the bite of both animals possesses more than the force necessary to crush a bowling ball. The issue here is that going in for that bite would open them up to attacks from the opposition, with the grizzly risking taking some heavy blows, and the gorilla letting its guard down to the several-inch-long claws of the bear. Now, something very important to take into context here is that both of these animals can take much more of a beating than the average human. With that being said, in this scenario, I’d say the gorilla is taking a far more intense risk going in for a bite than the grizzly, seeing as the fat, bones, skin, muscle, and fur of the bear will be able to withstand the physical force of hits far better than the gorilla can withstand the stab and slash wounds that come with the grizzly’s swipes. So, a sustained close encounter is quite a bit more likely to prove detrimental to the gorilla’s chances, especially if they don’t even end up landing the bite they risked it all for.

In more ways than one, the bear’s claws will likely prove to be a major tide-turner in the salmon-lover’s favor. Whether it’s fair or not, as I said before, open wounds are going to cause far more damage to a gorilla than blunt force trauma will to a bear.

A very important thing to note here is that grizzly bears are hunters, whereas Gorillas are almost strictly herbivores, aside from bugs. That being said, the bear will likely be going into this fight with much more experience in deadly combat with other animals than the gorilla. It is fairly common for gorillas to fight each other, but the grizzly has far greater experience and instinct when it comes to taking down animals of other species.

To be clear, I’m not saying that this will be an easy fight for the grizzly, as the gorilla definitely has its advantages. The gorilla’s sheer upper body strength will likely be its greatest ally in this fight. It’ll have to avoid those grizzly claws, but if it can get close enough, it could definitely land some wild haymakers. The reach of the gorilla might also help, as they have rather long arms in proportion to the rest of their body. For those not very familiar with fighting, the logic here is fairly simple; the longer your arms are, the further away you can keep the rest of your body from the enemy when you throw a punch. But as I mentioned before, the toughness of the grizzly is really going to pose an issue for the gorilla, despite some estimates showing that a gorilla’s hit could pack more than 2000 lbs. of force.

With all this being said, let’s review the most important factors. The gorilla and grizzly have a relatively similar bite strength, but the bear’s build makes it harder for a gorilla’s bite to be equally as effective. The gorilla’s biggest advantage is its spry movement, whereas the grizzly’s primary advantage is its claws. The grizzly is larger, but the gorilla is stronger. The grizzly is faster, but this will likely not matter as much beyond a possible initial charge.

In the end, it’s not a clean sweep, but the grizzly’s claws and its size really put the silverback in an uphill battle. I’m not saying it’s impossible for a gorilla to beat a grizzly bear, but based on my analysis of their respective statistical averages, betting on that just isn’t in one’s favor.