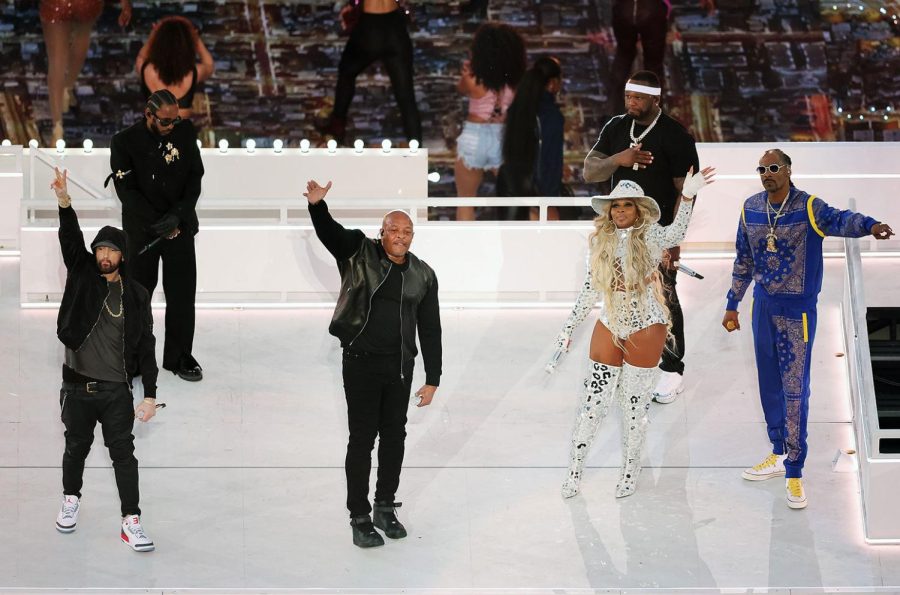 While the outcome for the Super Bowl was disappointing for most, all music fans rejoiced. The heartbreaking ending for the Bengals was tragic, but we all got to witness one of the best halftime shows ever. With a bunch of iconic artists coming to perform, there were mixed opinions among music fans. Using my music opinions and common sense, I have created my ranking for the halftime show performers.

My entire life, I’ve only watched the Super Bowl for football — except for this year. When I saw that Kendrick Lamar was headlining, I knew we were about to see something legendary. Kendrick had an incredible performance and outshined everyone else. The song choice, visuals and rapping were all perfect.

Dre and Snoop came in a close second, and they have an argument for having the best performance. It was crazy seeing older rap legends performing live that well. They did some classic songs, and the show wouldn’t have worked without them.

I was completely flabbergasted when I saw 50 Cent come out from the ceiling. Definitely the most iconic moment of the entire snow. The transition from Dre to 50 couldn’t have been better. He had a quick performance, but still memorable.

Mary J. Blige was the odd one out of the other artists, being the only non-rapper, but that did not diminish her set. Her performance had the most emotion, and we could all tell how much heart she put into it. While she did great, her music could not be any more different from everyone else. It changed the mood completely and didn’t fit the theme as well. Therefore, that makes her lower on my rankings.

5:  Anderson .Paak on the drums

About ten minutes into the performance I said to myself, “is that Anderson Paak on the drums?” Turns out it was in fact Anderson .Paak on the drums. Overall the most random thing that happened (still better than Eminem).

Disclaimer — I am an Eminem hater. You might ask me, do you strictly live for negativity? My answer would be yes. Eminem’s set was subpar and you can’t convince me otherwise. My entire mood was killed once he started doing his boring lyrical rap. Something about Eminem just makes me mad. If you are an angry Eminem fan reading this, don’t take this too hard. I understand why you enjoyed it. We simply have very different tastes in music.