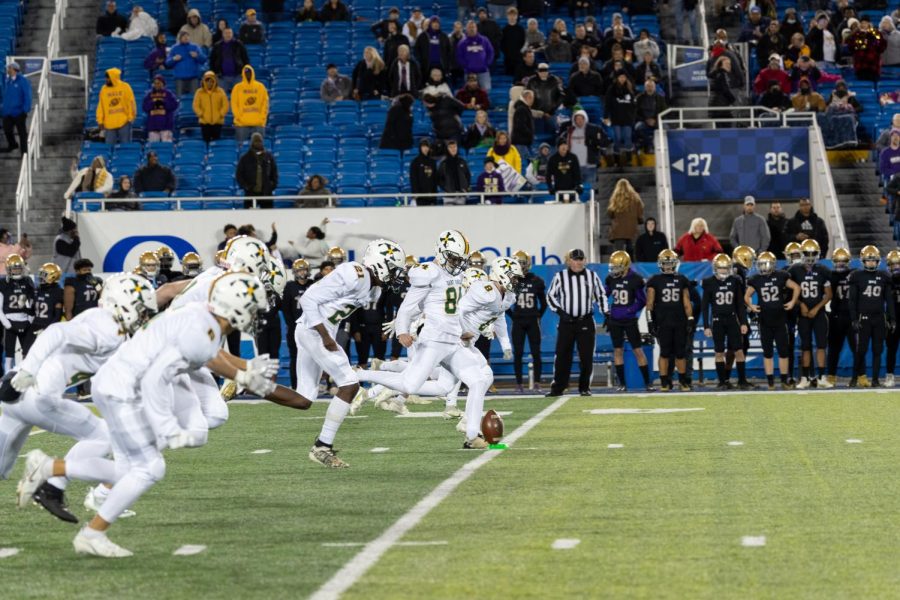 The Tigers overcame Male for their first state title since 2009. A very historic season to say the least, and now it is time to shine some light on some of our players.

Jack had one of the most impressive quarterback seasons in St. X history. Ending the season with 1906 passing yards, 22 touchdowns, and a completion rate of 69%. Sivori performed in big moments and high-pressure situations. This is only the beginning of the recognition Sivori is receiving — he was just named Max Preps Player of the Year for the state of Kentucky.

Bennett has been a solid receiving target for Sivori this season. When Sivori needed a touchdown, Bennett was that guy. Out of Bennett’s seven catches, four of them connected for touchdowns.

Mekhi has had himself a season. He has been Sivori’s top target this entire season, and rightfully so. Receiving seven touchdowns with 708 yards and rushing for four touchdowns for 230 yards. These stats are impressive enough for Mekhi to have a shot at all-state.

Ben Marks has been a force on defense. Marks leads the Tigers on defense during his senior season, and his stats back that up. In 13 games played, he has recorded 53 solo tackles, 36 assisted tackles, three interceptions, two sacks, and even recorded a safety.

Tyler Boggs has had a scary presence as a safety. Boggs stepped up this year and had a complete breakout season. He recorded 50 tackles, 20 assisted tackles, two interceptions, one fumble recovery, and a blocked field goal.

Not one, not two, but three positions Mekhi went all-district in. Mekhi dominated as a wide receiver and stepped up to to be our kick/punt returner. He returned the ball 12 times for 299 total yards with an average of 24.9 yards on each return. On the punt return side, Mekhi received 20 punts for 308 yards. Mekhi ended the season with 1,545 yards in total. He has become completely unstoppable and is one of the most well-rounded players on the team.

Nolan Wolford has had an extremely consistent season as a kicker. Out of the 55 extra points Wolford attempted, he completed 53 of them. Wolford only got to attempt two field goals this season, and he connected on both of them. It is only his junior year and he has already contributed a lot to the team. His accuracy came in clutch during the state championship to put us up by ten points.

Ryan Zoeller rightfully deserves the award for all-district. Ranked a five-star by Ray Guy kicking camp, Zoeller has an impressive leg. Zoeller was statistically ranked the number one punter in the state of Kentucky this season. In his nine games played,  Zoeller punted 21 times for average yards of 37.6. His longest punt was 57 yards and had six within the 20yard line.

The offensive line is arguably one of the most important units in football. It is similar to air conditioning. When it is working, no one notices or says anything. However, when it is not working you complain and get frustrated. Linemen do not have stats (besides pancake blocks and calories consumed), but our line has given Sivori the time to throw dimes to Mekhi Smith and Michael Duddy. Without our lineman, our offense would not be nearly as efficient.

(All statistics are compiled from MaxPreps)