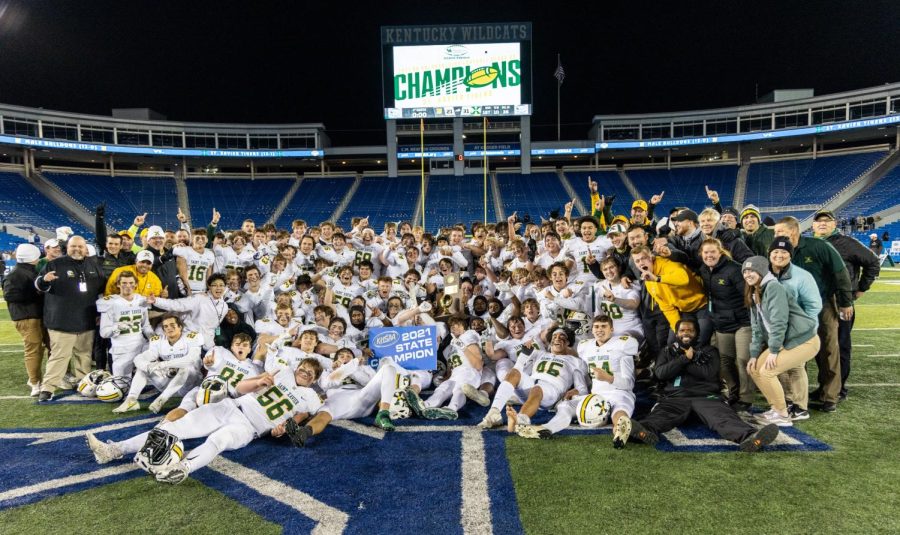 Saturday, Dec. 4 — The Tigers travel to Lexington and defeat the Male Bulldogs 31-21 to win their 15th State Championship — first since 2009.

Entering Saturday, there were a multitude of storylines. St. X and Male had combined for a whopping 29 state championships (St. X with 14, Male with 15), and when the day was over, it was bound for thirty. St. X entered the day with a 13-1 record — the only loss coming to Male. Male was undefeated, posting an impressive 13-0 record, and quite frankly, dominating all of their opponents (with the exception of St. X) winning by an average score of 42-7.

The stage was set. The Male Bulldogs were the favorites. Their high powered offense consisted of a “Big Three.” Senior QB and WKU baseball commit Nic Schutte came into the game with an impressive 65% completion percentage, over 2,500 yards through the air, and a 29:1 touchdown to interception ratio. Senior WR and Wisconsin Badgers commit Vinny Anthony hoisted almost 1,000 receiving yards and 13 touchdowns. And to round out the trio, junior RB Daniel Swinney had put up over 2,500 yards on the ground and 29 rushing touchdowns. 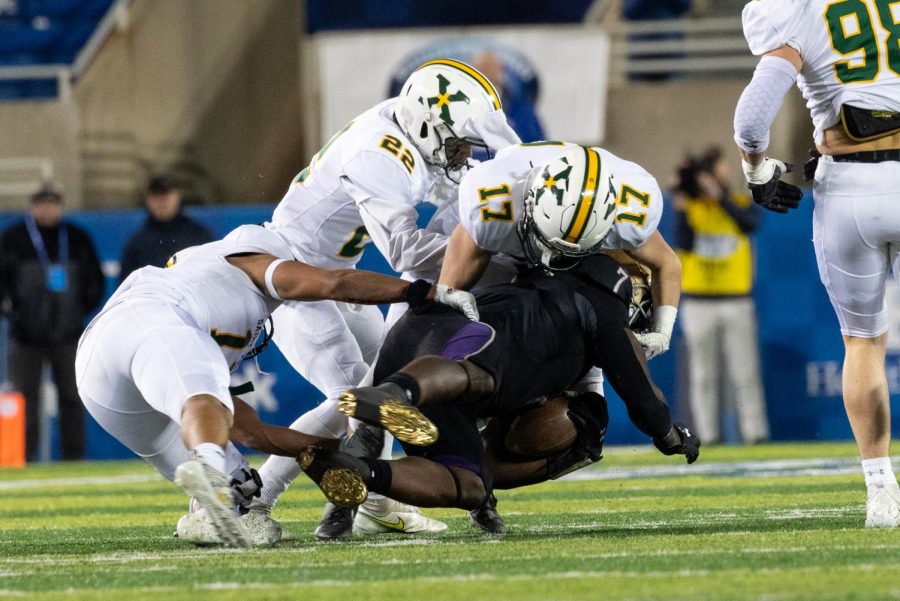 In addition to the undeniable talent on the Male offense, the defensive side provided a 4-star senior DL and Louisville commit in Selah Brown, another 4-star junior DL in William Spencer, and the defense in total gave up an average of roughly seven points per game. Simply put, they had been dominant on both sides of the ball. 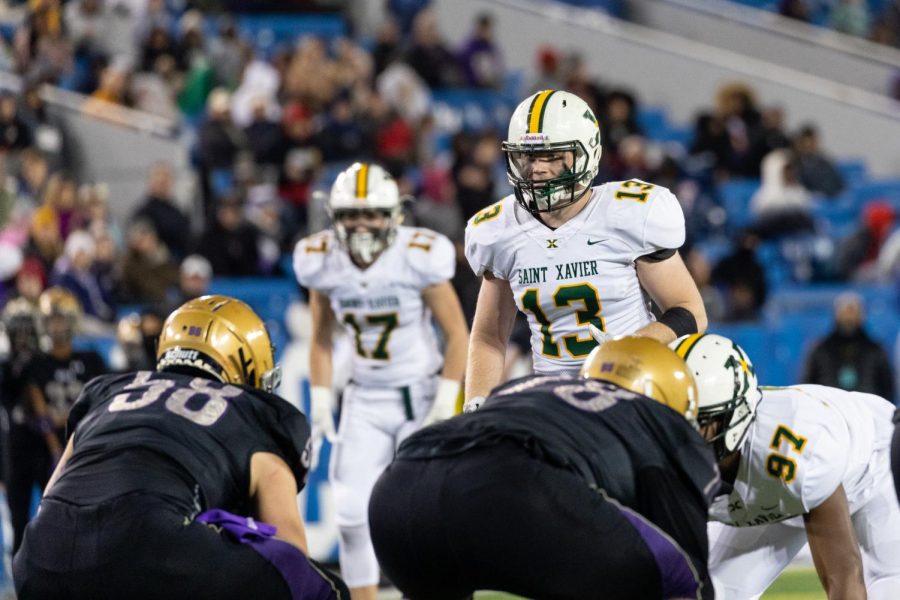 The media seemed to only talk about the Bulldogs as Saturday approached, and maybe rightfully so, but since the Tigers’ only loss to Male back in early September, they have seemingly embraced an underdog mentality.

Since the loss, the defense has just allowed roughly 11 points per game (they allowed 24 points per game the first three games of the season).  Senior DE Thomas Tafel had helped lead the defensive charge with his eight sacks on the season (ranking top ten in the 6A Class). Senior CB Jackson Poma and senior LB Ben Marks have helped lead the turnover charge this year, each having three interceptions on the year.

The Tiger offense had not missed a beat all year, averaging 34 points per game—fourth in the 6A Class. They had been led by senior QB Jack Sivori, who had been nothing short of dominant on the ground all season, rushing for over 1,200 yards on less than 200 carries—top ten in the 6A Class (includes all rushers). He accounted for a total of 47 rushing and passing touchdowns on the year. He’s had a tremendous supporting cast, with senior WR Mekhi Smith ranking in the top 15 in receiving yards at a little under 800 yards and an additional eight receiving touchdowns. Senior RB Justin Walsh, who had been battling an ankle/knee injury the past few weeks, had rushed for 587 yards on the season prior to the championship game.

By the time of the 8:00 p.m. kickoff, everyone could feel the energy at Kroger Field. Fans from all around the state traveled to see the 6A Class Championship, and the product on the field did not disappoint. 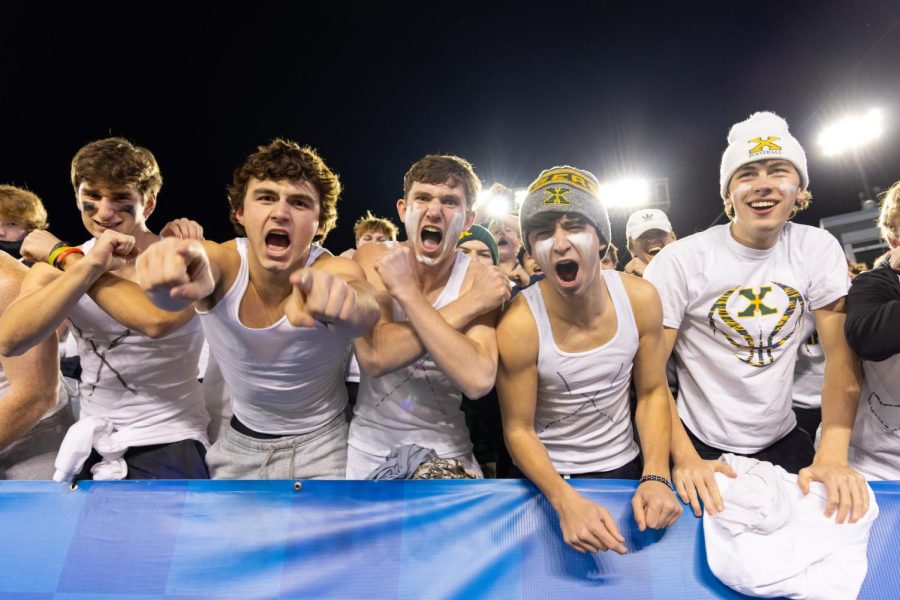 The Bulldogs got on the scoreboard first with Nic Shutte’s 88-yard pass in the first quarter to a streaking Vinny Anthony (missed the PAT). Anthony finished the game with two receptions for 129 yards, including two touchdowns. The Tigers struck back in the second quarter with a long drive that ended in a Jack Sivori 2-yard rush. At this point, the Tigers led 7-6. 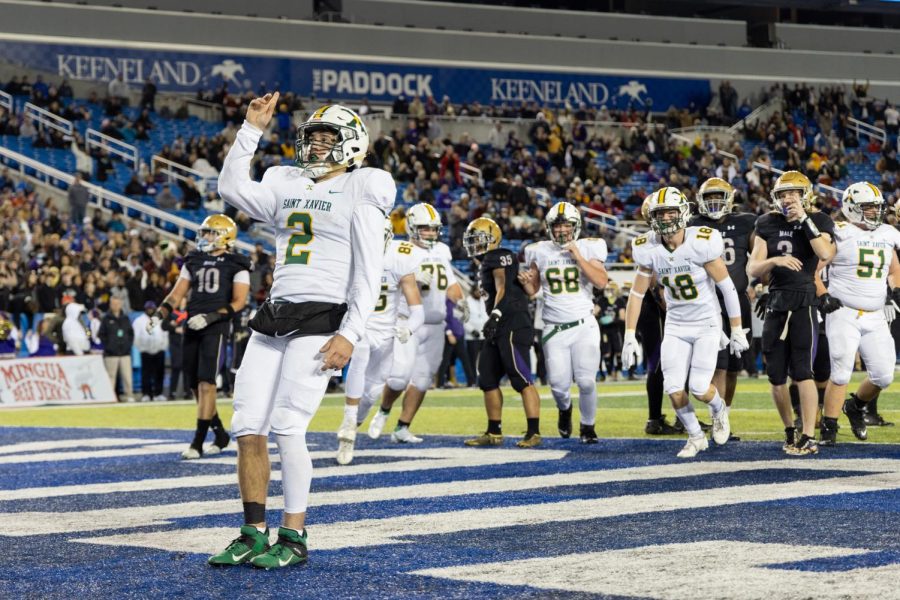 After the Tigers’ score, Nic Schutte marched right back down the field with a drive of his own, throwing a 19-yard touchdown pass to Dominic Vrbancic to enter into the half with a 13-7 lead for Male.

The third quarter was dominated by the Tigers. Junior kicker Nolan Wolford made a 26-yard field goal, getting the Male lead down to three, 13-10. Shortly after, QB Jack Sivori threw a dime to WR Michael Duddy for a 26-yard touchdown to take the lead, 17-13. 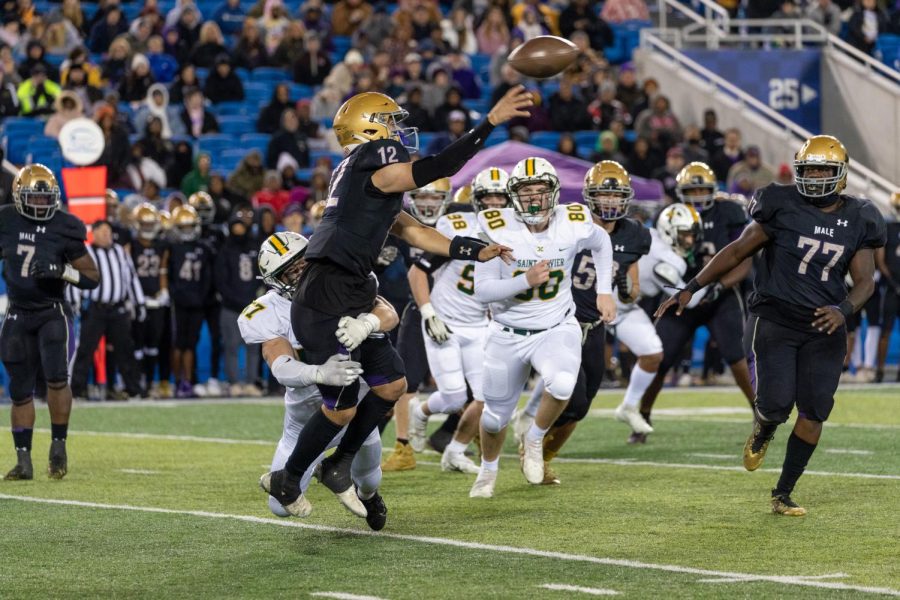 Male was a top ranked team in the state for a reason, meaning, they were not going to go down without a fight. Nic Schutte marched down the field and threw a 41-yard touchdown pass to Vinny Anthony, and with the help of a two-point conversion, Male only trailed by three (24-21).

After a couple back-and-forth drives resulting in no points, the ensuing third and four play call for the Tigers was for all the marbles. QB Jack Sivori snapped the ball and found Mekhi Smith streaking down the field. A perfectly thrown ball and an insane, one-handed catch resulted in a 45-yard touchdown for the Tigers, commanding a Tiger 31-21 lead with just under two minutes left in the game. The score seemingly put the Tigers on top and ignited the already impressive Tiger crowd. 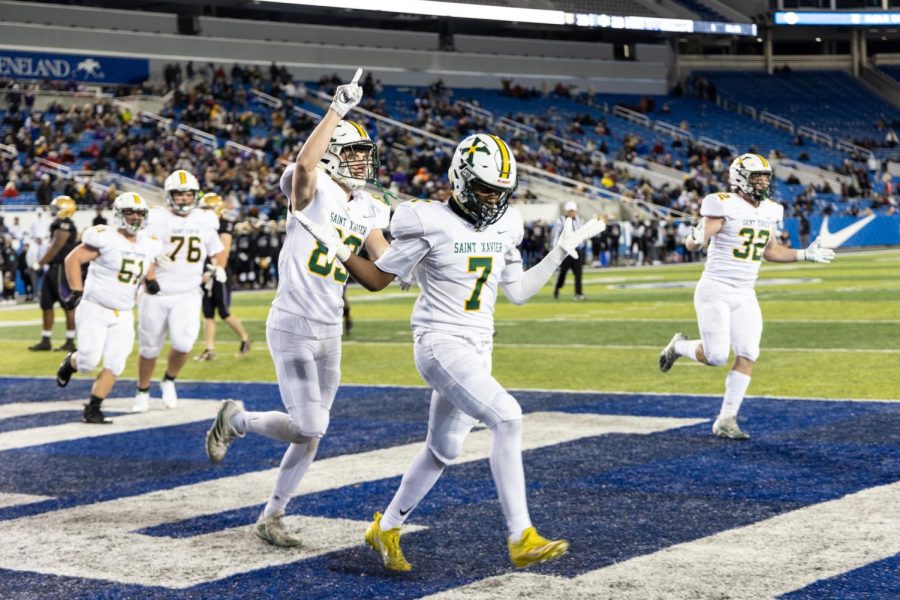 When the clock struck zero, players rushed over to the Rage Cage and everyone celebrated together. Senior QB Jack Sivori was awarded the game MVP with a stunning performance. He finished the night with 306 yards through the air and another 64 on the ground. He had four touchdowns in total. Senior WR Mekhi Smith finished the game with 10 receptions for 128 yards and two touchdowns. Senior LB Brandon Shaffner led the Tiger defense in tackles with 8.5. The defense had three total takeaways, two of which were through the air. Senior Matt Donhoff and junior Tyler Boggs both grabbed an interception. 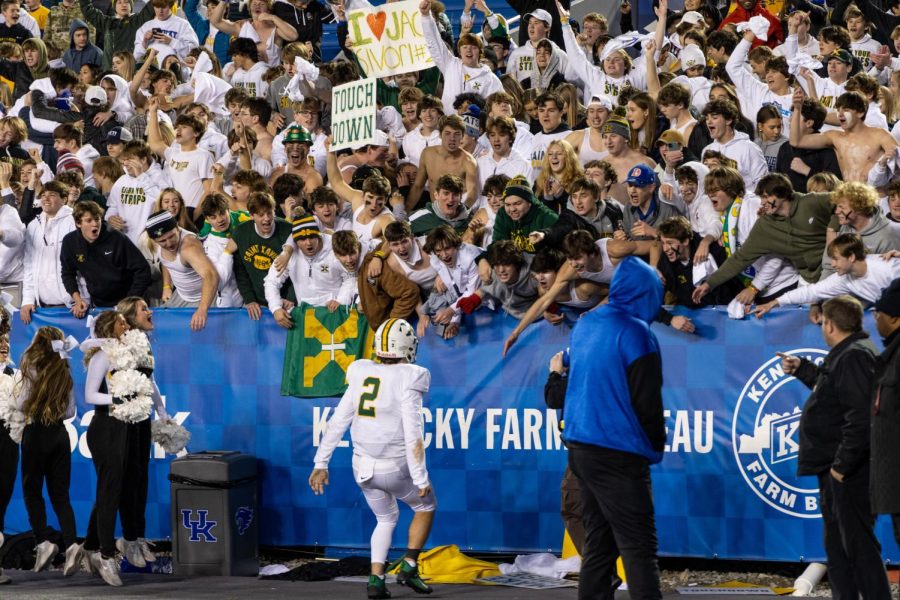 Sivori made a strong case for Mr. Football over the course of the season and especially on the biggest stage. He stepped into the starting quarterback role this year with confidence and grit and helped lead the Tigers back to where they belong — on top.

“It feels great to win because when we came in here our freshman year that was always the goal. It’s awesome to know that we accomplished that goal,” Sivori said. “I credit the coaches and the players for how much time we have put in this year. We believed in ourselves and did what they said we couldn’t.”

Head Coach Kevin Wallace, who was named the 6A Coach of the Year on Monday Dec. 6, got the job done in only his fourth year at St. X.

“Our players and staff had a belief in our plan and executed assignments in an elite fashion,” Wallace said. “Our seniors were a group that loved football, loved competing, and loved being around each other. It helped us form an ‘Above The Line’ culture that propelled our attitude and effort on a daily basis.” 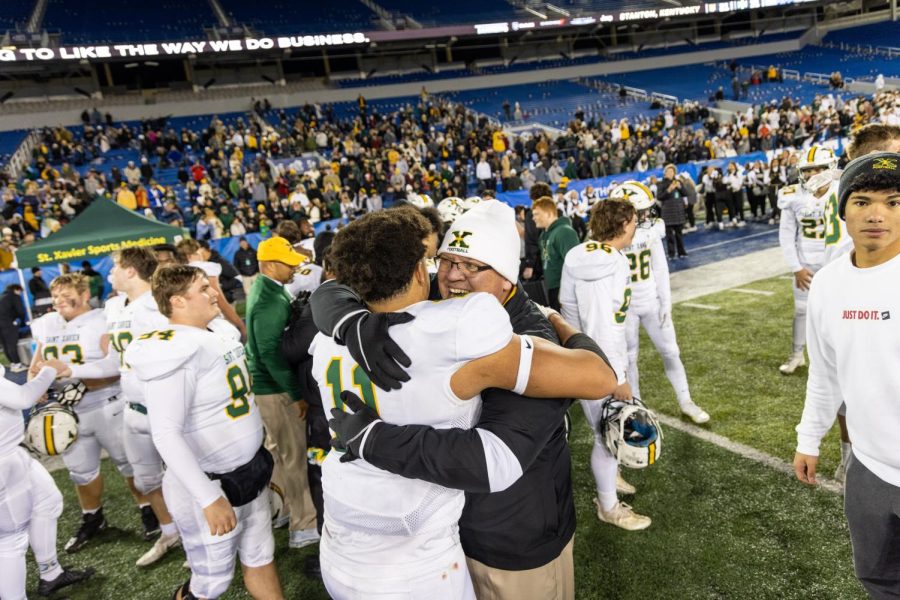 His Tigers embraced the underdog role in a game where very few media members picked them to win. They beat the previously undefeated Bulldogs on both sides of the ball. With the trophy back home on Poplar Level Road for the first time since 2009, St. X has ended the drought and started a new decade of Tiger Football.

“We are going down in history as the team who broke the longest championship drought it St. X football history,” Sivori said. “We will always see that 2021 in the basketball gym on the championship banner.”