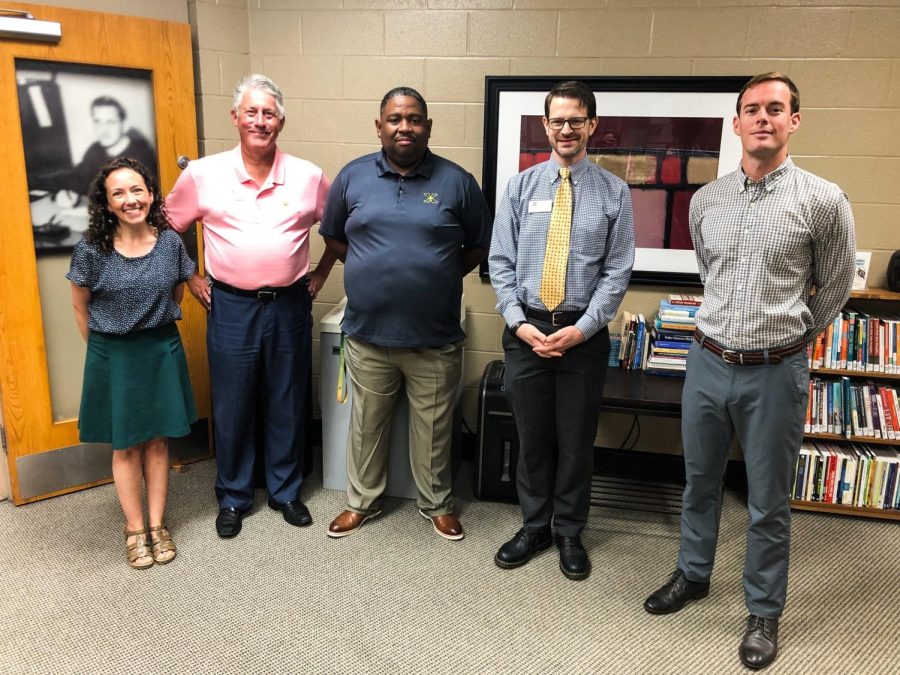 Starting in the first quarter of 2021 at St. X, we gained five new faculty members. We now have Mrs. Dupont and Mr. Derrick in the science department, Mr. Kemper in learning support, Mr. Smith as a new assistant principal, and Mr. Lloyd in the world language department. Get to know a little about each one below:

Mrs. Dupont attended Mercy Academy for high school, and she began teaching in 2013 after making the transition to teaching from working as a pediatric nurse.

She taught her first three years at a school in Washington, D.C.  She then taught for a year at a college in Jinja, Uganda.  Most recently, she taught at Malden Catholic, a Xaverian Brothers school outside of Boston, MA.

“I was drawn to St. X because I had enjoyed working in the Xaverian Brothers network previously, and I knew how much the values of the Brothers are woven into the school culture,” Dupont said. “Also, my brother attended St. X, and it was life-changing for him. I wanted to be a part of a school that was mission driven and committed to helping students grow throughout their four years here.”

After finishing the first quarter, she has really enjoyed getting to know the students and faculty and staff. “Everyone has so much pride in being a part of this school and students are eager to make the most of their experience, both in their academics and in their extracurriculars,” she said.

Mr. Kemper attended Bishop David High School from 1975 to 1979.  He began his teaching career in 1985 as a resource teacher at Nashville Elementary School in Brown County, In.  He then taught middle school and was the acting principal of the Bloomington (IN) de Paul School, a private and independent school for bright students with learning challenges.  He and his wife moved to Louisville to work at The de Paul School in 1990, where he served as admissions director, summer boarding program director, and then head of the school.  He retired from de Paul in 2021.

“The opportunity to help direct the new Viscusi Learning Support Center captured my interest and stirred my imagination,” Kemper said. “Since my childhood, I have held St. X in the highest esteem, and it is incredible to find myself working here and enjoying the many benefits of being a St. X Brother and Tiger.”

As he becomes more familiar with St. X, he wants to serve in the retreat program, moderate a new club, and discover new ways to leverage our fabulous new Learning Support Center.

“I find much encouragement and joy from my faculty colleagues. Their comradery and heartfelt care for our students inspires me,” he said.

Mr. Smith first attended Detroit East Catholic High School until the middle of his junior year when he transferred to Huron High School.

He began by substitute teaching in Dayton Public Schools.  After that, he went back to school to get his master’s degree in teaching.  Next, he taught at Middletown High School, then Fairborn High School for several years.  He and his wife then decided to move to Louisville where he taught at Knight Middle School, then he became a resource teacher at Watterson Elementary, Goldsmith Elementary, then at Carruthers Middle School.  After this, he took a job as a district resource teacher in which he assisted all the high schools in Louisville east of I-65 with behavior.

“I chose to come to St. X to further my career, to be in a good environment, and to move into an administrative role,” Smith said.

He is a full-time dad of two kids and he’s active in his fraternity and church.

After his first quarter here at St. X, he said what he likes the most is, “the culture, the school spirit, and seeing the students really involved in their high school.”

Before coming to St. X, he taught at Holy Cross & Assumption High School.

He also taught environmental engineering and water treatment classes at WKU and U of L.

“Being able to teach computer science and robotics all day is more play than work for me.  Some days classes feel like we are doing computer and engineering games,” Derrick said. “Coming back to the place where I went to school, that made such a big impact on me as a person is also very special to me.”

At St. X, he helps in the innovation lab and coaches the VEX Robotics team.

After finishing his first quarter here at St. X, he said he likes the students the most.

“There is always someone who wants to stay after class or just wanders into the innovation lab and wants to take an assignment to the next level, has a cool project they want to do, or just for fun,” he said.

Mr. Lloyd attended St. X and graduated in 2010.  His career in teaching began at Beaver Creek Ski Resort in Colorado. He taught snowboarding and realized he liked working with people and helping them improve themselves. Since then, he has taught high school German in Charleston, SC for one year and middle school German for JCPS for two years.

“Teaching at St. X has been my goal since I decided to pursue a career in teaching,” Lloyd said. “This place did so much for me as a young man and I want to give that experience back to the young men I teach.”

He is an assistant wrestling coach and a German club moderator.  What he likes most about teaching at St. X is having the opportunity to make a positive impact on the students.