Cross Country Tigers Are Off and Running 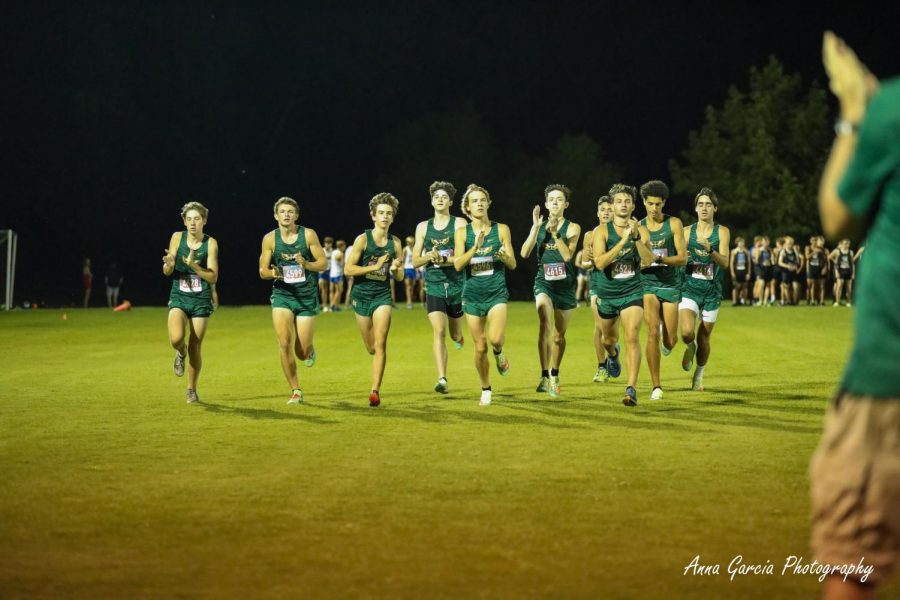 The Varsity Tigers clap-out before their racing debut at Run for the Gold.

1st at Rumble Through the Jungle

1st at the Louisville XC Classic

1st at the KTCCCA Meet of Champions

1st at the Region 3 AAA Championship

After a dominant year in the state of Kentucky last season, the Tiger cross country team is now looking towards the national stage. With already three Nike Cross National Championship qualifications in the program’s history, the Tigers believe that this is their year to make a run for one of the two coveted bids from the Southeast region. This year’s team has a solid core of ten guys ready to compete, including three school record holders leading the charge in Roman Schrader, Nick Brooks, and Sami Hattab. It being Head Coach Kyle Yochum’s third year at the helm of the program, a chance to make waves on the national level could elevate his squad’s future to unprecedented heights.

While the entire team will race a multitude of times throughout the course of the season, a few races will certainly be keyed upon by the varsity squad. The team kicked off their season this Saturday at the Run for the Gold in Elizabethtown and took home second place in the only night race of the season. This week is also the St. X Tiger Run where the team will look to defend their home course at one of the premier races in Kentucky. Though both of these races will produce some fast times, it wouldn’t be a surprise to see the Tigers race more conservatively in these early season contests.

However, after a few minor races, three straight weekends stretching from September 18th through October 2nd will likely dictate how the rest of the season will progress. The Tigers will first look to challenge some of the big names here in Louisville at the Trinity Valkyrie invitational—a race notorious for producing fast times and shiny PR’s. Next, the team will travel north to the Palatine Invitational in Chicago, Illinois. Though the performances won’t necessarily be as impressive, it could produce a preview of the national championship race later in the season. Finally, the Tigers plan to travel to Cary, North Carolina for the Great American XC Festival, a premier race on the course of the regional qualifying meet in November. The team will definitely look to key upon this race, as it will be the perfect gauge to see where the team stands in the regional rankings and let them know what they need to do to earn one of those two automatic team bids 7 weeks later at Nike Cross Regionals.

After completing their regular season with a few more minor meets to stay fresh, the Tigers will kick off their postseason completion at the Region 4 AAA meet where they will look to defend both the team and individual title from last season. Just one week later though, the team will also look to defend their State Championship team title in Bourbon County, Ky just outside of Lexington. With aspirations of a National Championship bid, winning State could be the confidence boost the team needs and will hope to ride their wave of momentum all the way to Portland, Oregon after stopping in Cary, NC for the regional meet. Though it’s a tall task, the Tigers hope to secure their bid there and take the trip out west for the fourth time in the program’s history at a shot for the team title with the big dogs.

Setting the school record and working together to place second at the Nike Track and Field National Championship in Eugene, Oregon this past summer, the trio of senior Roman Schrader, senior and captain Nick Brooks, and junior and captain Sami Hattab are looking to lead another trip out to Oregon for the team cross country championship. With an expected average of 15:50 for 5k being necessary to secure a bid, all three have aspirations of going below the 15:30 mark with sophomore phenom Tristan Hindorff following shortly behind the core pack.

With six more spots available on the varsity team, including one scorer and two for the official top 7, a multitude of athletes have the chance to fill those roles. Senior Noah George, sophomore Brodie Terkhorn, and the brotherly duo of senior captain Luke Napier and junior Aaron Napier all look to be in contention for the final three varsity spots. Additionally, the junior trio of Graham Ice, Javier Santos, and captain Talbott Dilger along with sophomore Zack Blincoe all seem poised for big breakout seasons. The real dark horse candidates of the year is the senior duo of Colin O’Bryan and Dominic Garcia as well as leader of the strong freshman class Thomas Weber. All three have the chance to inject themselves into the varsity team conversation with just one or two big races.

Though the Tigers have lofty goals of, as senior Roman Schrader puts it, “Rings and Records” this year, the team slogan of “Leave No Doubt” will surely motivate them to continued success in Kentucky. When asked about the importance of winning State, senior captain Nick Brooks said, “ We don’t want to hang our heads about losing state, so we have to do what we do best, which is winning. Winning state championships are great, and of course is a goal of ours as a team.” He went on to comment about the goal of going to nationals as well, saying, “But sometimes you have to set your goals high in the sky, and if you want that goal bad enough, you can go and get it.” If this season lives up to the potential that the athletes, coaches and fans believe it can, it will surely be one for the ages and possibly mark the beginning of a new cross country dynasty from the state of Kentucky.